5 Every Week: The longest movie ever, salad as art, LAPD's rock garden

Behold: five great things you should do in Southern California this week, from art to food to music to an adventure we’ll call the Wild Card from the makers of the 5 Every Day app.  Get this as a new podcast in iTunes.  If you want five hand-picked things to do in Los Angeles every day, download the free 5 Every Day from the App Store.

ART: Out 1 Potluck at Cinefamily

What’s your ideal length for a movie? 90 minutes? Two hours?

Good news: there's a place for you. The Super Long Movie Club is a group of cinematic daredevils who burn the celluloid at both ends. They’re screening a single 13-hour French movie through this entire weekend.

Zac: The movie is called “Out 1,” and it’s a 1971 New Wave flick that’s been billed as the “Holy Grail of Modern French Cinema.” It stars close to a dozen of that nation’s biggest names, and it’s barely ever been screened in the 45 years since it was first finished, for understandable reasons.

So, that makes it arguably the longest narrative film in cinematic history. Not for the feint of heart.

But what about the basics? Food? Bathroom breaks?

Breathe easy: the Club thought of everything. There’s even a potluck to keep your blood sugar on track.

Here’s an understatement: the Getty Center’s got room to spare. Space is one of the palatial property’s many finer qualities.

Since last month, artist Julia Sherman has been making something useful of all that real estate, by converting a modest patch of the Getty grounds into the Getty Salad Garden. It’s an installation of raised beds currently growing organic heirloom vegetables and salad greens.

Sherman did the same thing last year on the rooftop of MoMA’s PS1 in New York, and that garden became a site for performances, artistic conversations, and various salad-related happenings, like a re-staging of a Fluxus performance-art piece called “Make a Salad,” last performed in 1962.

Consider it salad as a form of social practice.

That happens to pair nicely with the Getty’s new food-inspired exhibitions: The Edible Monument: The Art of Food for Festivals and Eat, Drink, and Be Merry: Food in the Middle Ages and Renaissance.

No word yet on if they’ll let visitors pinch a few greens, but we’re bringing our tongs just in case.

There’s a marquee at Sunset Market Plaza in Echo Park that’s been taunting us. It says “Button Mash,” and it’s been teasing the neighborhood’s spacious new barcade — yes, that’s a bar and an arcade combined — for months.

But Button Mash is finally in business.

Barely open two weeks, it’s become instantly popular, with people lining up to drink beer and twiddle classic arcade games like Asteroid, Pac-Man, and a solid lineup of pinball. What we’re most excited about, though, isn't the games — it's the food.

Button Mash’s kitchen marks the triumphant return of Starry Kitchen, a once sorta-illegal pop-up restaurant in its proprietor’s apartment, and then, later, off nights in a dingy Chinatown bar.

But now Starry Kitchen’s got a full, well, kitchen. And they've expanded the menu, which still features some of the most exciting, critically-beloved, downright weird pan-Asian street food in town, including their legendary electric green spicy tofu balls.

Mustache Monday is L.A.’s best straight-friendly queer dance party. It's an inclusive weekly escape that recently relocated from its longtime home at divey punk bar La Cita to the basement of the Globe Theatre on Broadway.

Host Nacho Nava promises the new underground club will somehow be both louder and sleazier than the old space, which we find a little hard to imagine.

But if anyone can pull it off, it’s the Mustache crew.

It’s a perfectly catch-all cure for a bad Monday, and some of the most reliable people-watching in town. 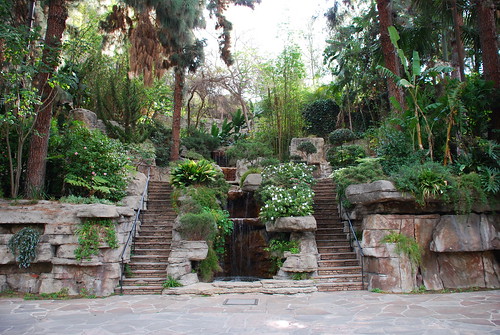 We normally do everything in our power to stay as far off of the LAPD's radar as possible — no life of crime here. But there's a certain subversive pleasure that comes with spending a couple of hours loitering all over police property.

You've possibly caught sight of the Elysian Park Police Academy along the backroads beside Dodger Stadium. It's in some foreboding barracks near Chavez Ravine — kinda hard to miss.

What you might not know is that the grounds inside are home to some very beautiful, and totally public, spaces.

Come to see waterfalls, reflecting pools, flagstone pathways, and a patchwork of carved stone benches and rock gardens that look like set-pieces from "The Planet Of The Apes." Bucolic stuff. Setting foot inside definitely feels like trespassing — a sense amplified by the occasional ringing of gunfire from the nearby police shooting range. But this is public property, and there’s nothing they can do to stop you.