Friends, raise a glass to King Ludwig I, who in 1810 married Princess Therese of Saxe-Hildburghausen and started the public festival that became known as Oktoberfest. Here's the king in his traditional Oktoberfest outfit and haircut: Despite its name, Oktoberfest starts in September. I don't know why, but does it really matter? In any case, here's just a sample of the many Oktoberfests in Southern California. If you know of another, please add it in the comments section.

I have no reason to dispute Alpine Village's claim to the largest and oldest Oktoberfest in SoCal, generally running weekends from Sept. 11 to Oct. 31 in Torrance. And surely the most bizarrely wonderful attraction at Alpine Village is Marc Hickox's tribute to the German phenomenon Heino, who has sold more than 50 million records, more than Dietrich Fischer-Dieskau, or even David Hasselhoff. With more added reverb than an 80-year-old Frank Sinatra, Heino sings Schlager und Volksmusik, sentimental tunes about German things... like Mom. 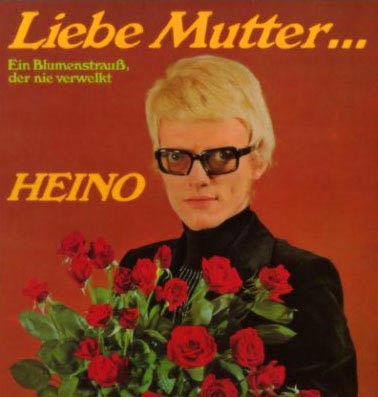 And the Mutters sure do love him:

Heino in a field of old people, singing old songs

What is Heino, I asked my German colleague Alex Schaffert. She  replied, "I can't explain it." But again, does it matter? Hickox — who is actually a brunette Canadian actor — says he plays Heino as the "international sensation that happens halfway through the night."

To be clear, Hickox calls himself Heino!, not Heino. But he says the real Heino seems to not take himself too seriously and has not tried to stop him or the other Heino impersonators.

To hear our entire conversation, click on the blue audio player that magically turns orange.

Alpen Vagabunden is one of the featured bands at Old World in Huntington Beach, which  throws its 39th annual Oktoberfest Sunday, Sept. 13 through Sunday, Nov. 1, with dachshund races, Oktoberfest babes and a $5 Kinderfest. VIP tickets (which let you skip the line), are $40 most days, but admission is only $10 at the door. Admission is free on Wednesday and Thursday, 6:30-10:30 p.m.

Big Bear Lake throws an Oktoberfest celebration weekends from Sept. 19 to Oct. 31. It's their 45th annual. Dana Point's runs Oct. 17 & 18, and supposedly has more German handcraft beers than any other Oktoberfest in the region.

If meat sausage isn't your thing...

For something more laid back:

The German-American League, which has its clubhouse at 1843 Lincoln Boulevard in Santa Monica, was founded in 1905 and lays claim to being "one of the oldest German-American organizations in California." Their Oktoberfest is Sunday, Sept. 6, starting at 1 p.m. The menu includes Riesenbratwurst, Gegrillte Haehnchen, Geraeucherte Forellen, Leberkaese, Sauerkraut, Kartoffelsalat mit Speck, Gulasch Suppe a la Ursel and frisches deutsches Brot. There will also be dancing.