I went to an art exhibit at UCLA’s Fowler Museum the other day, and the first piece that really grabbed me was a wall of over 500 prefab, blue-gray birdhouses, separated by wads of straw. Sometimes they tweet recorded bird calls, sometimes they play the sounds of the human voices in the world’s favelas.

The exhibit is called World Share, and it’s the nation-state of artist Pascale Marthine Tayou. The piece with the birdhouses is called “Favelas,” a crowded habitat randomly stacked much like Moishe Safti’s  1967 Montreal Worlds Fair apartments, only for birds.

We are all in this world together, he’s saying: birds and people, audible, invisible. Both free and tied to the earth. It’s a willful, wistful and marvelously artistic accumulation of the world’s discards, animated by an African creator spirit.

Fowler Curator Gemma Rodrigues told me how the show happened: A few days before the opening, the cargo container containing the exhibit had not yet arrived in LA. So Tayou, with the help of the Fowler staff, decided to create a new show of art made from scratch, based on humble and locally available materials you might find at a hardware store, trash bin or recycling center. Tayou being a great improviser and inspirer, the project went quickly, and some of the show’s most remarkable and sizeable installations were thus made in LA.  But then the container arrived just before the opening. So half the show is old Tayou, and half brand new works, locally sourced, never seen before.

Tayou considers himself a world artist, a cosmopolitan nomad, with so many influences that it’s hard to count them. But first, there is his native central African nation of Cameroon, one of ultra-diverse Africa’s most diverse countries. 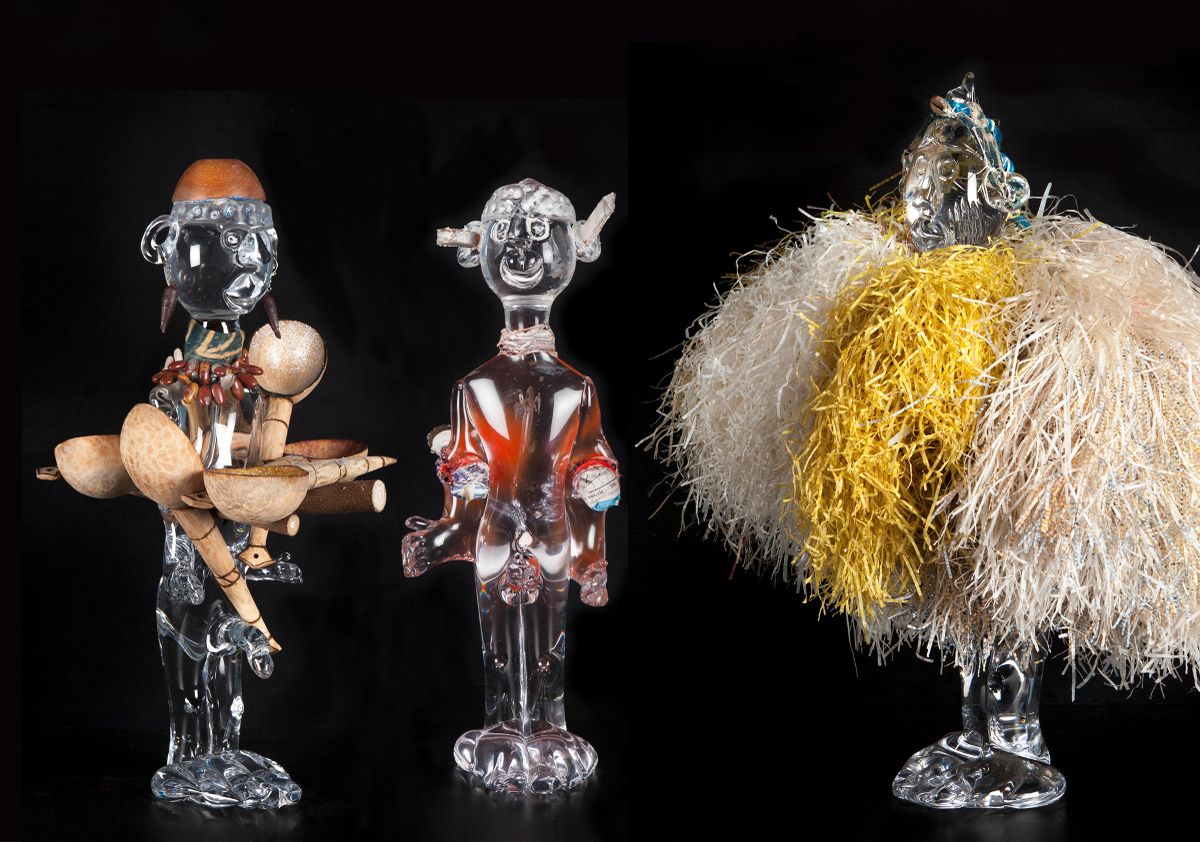 You see this influence most strongly in his tumescent blown glass sculptures that resemble strongly Cameroonian folk statuary, but they’re also festooned with all sorts of things: feathers, plastic toy snakes, wires, even flattened beer cans. Then there are the animals, particularly the birds that recur in his work. “A powerful metaphor for freedom,” Rodrigues says.

And then there is the art from all the waste materials that get tossed out by our transnational world, then fall from the rich nations into the poor ones ... everything from old razor blades and pizza boxes to the white plastic pipe that circles the gallery in a convoluted time line, indicating man’s abuse of the world’s resources.

Rodrigues says Tayou takes the most mundane humble objects and puts them together in utterly unexpected ways. “He coaxes the poetry out of them,’’ she says.

Or the sorry truth. I was struck by the common bicycles, stacked with almost two stories of tethered cardboard boxes. That’s the way things get moved around in Cameroon. But the overburdened cycle sculptures also show the way developed nations lay huge burdens on the peoples of Earth’s developing lands.

It’s a theme that emerges in Tayou’s poetry:

After a long and difficult routine battle,

The strongest prevailed over the weakest,

The same places were still in hell and the keys to paradise have not changed pockets.

World Share: Installations by Pascale Marthine Tayou, is at the Fowler Museum through Mar. 1, 2015.