(Don't go) ... Into the Woods. Or: Eduardo Sanchez gives Bigfoot a heart in 'Exists'

"It's the Bigfoot movie I've been wanting to make since I was a kid and I'm very proud of it."  -- Eduardo Sanchez on his new movie, "Exists"

The movie "Exists" opens this weekend in limited release in theaters, and On Demand online. It's about what happens when you piss off Bigfoot, and is based on the found footage premise of "The Blair Witch" Project. Which only makes sense: Eduardo Sanchez directed both movies. 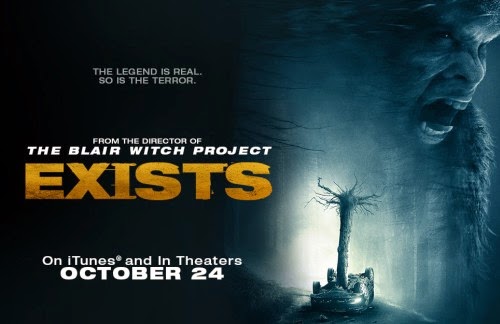 But first things first. To check the mikes, we often ask interview subjects to tell us what they had for breakfast.

Sanchez: "Huevos rancheros with William Friedkin, the amazing director of 'The Exorcist,' which I think is the scariest movie of all time. He wants us to write a script for him."

Sanchez: "Of course we said yes. You want us to scrub your pool, that's fine with me too."

Found footage was such a new concept in 1999, when "Blair Witch" came out, I remember being skeptical, but having that 5 percent or 10 percent amount of suspension of disbelief, which is all you need to make a movie work. The cast of "Exists" includes a videographer intent on capturing every moment of his camping trip with four friends, so we see the movie through his cameras' eyes. You think we'd be jaded by now, but it works even better than before. Sanchez says, "Our brain is just tricked into like, okay, when I see a shaky image, and the lighting's not great, and the sound (is bad), it must be real."

"Exists" is less than an hour and a half long. "Films in general are too long," Sanchez says. "Even great movies. Once the creature hits that cabin, it's a frickin' ride, and that's what I wanted to deliver. A popcorn fun film rollercoaster ride."

For much more of my interview with Eduardo Sanchez — including how he gave Bigfoot a character arc and a language — listen to the audio on this page, which is a nearly unedited version of our conversation in the Off-Ramp studio.