New galleries highlight the 'whippersnapper' part of the Huntington

The sergeant in his sun-faded uniform raises the sharply bayoneted World War II rifle against a black, stormy sky. But this is no recruiting poster — the man’s dark, gnarled, aged face is deeply seamed, as resigned as it is hardened to the soul-destroying fact of combat. 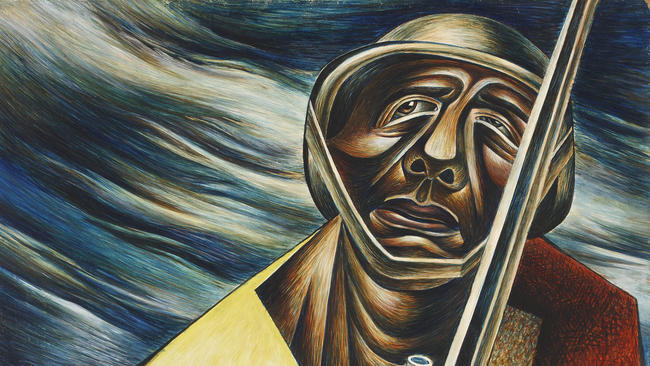 “The Soldier” is just one of the astonishments at the Huntington’s new show. It’s brought the American 20th century to the traditional home of “The Blue Boy” and its hallowed halls of classic European Old Masters.

"Blue Boy," a Gutenberg Bible — that’s how most of us still think about that unique culture and garden spot. But almost from its start, the Huntington has included American art, albeit from colonial and early post-colonial times. Gilbert Stuart’s Washington portraits, antique silver tankards and furniture, and some fine Copleys and Benjamin Wests are familiar if ancient Americana. But now there’s 5,400 square feet of new galleries dedicated to 20th century art of the USA.

“Soldier” is an extraordinary painting by Charles White, an African-American artist few Americans have heard of, but it’s not the only such work. Just as impressive, and from the same period, is a gorgeous sculptured screen by versatile African-American artist Sargent Claude Johnson. It hangs on the back wall of the new hall, but it used to mask a pipe organ in the state school for the blind in Berkeley. At one point, the three-part creation was sold for $164. It’s valued in the hundreds of thousands now, and is worth the trip to see all by itself.

Johnson and White’s works hang in illustrious company. There’s some splendid stuff by Reginald Marsh, like his wondrous steam locomotive portrait — a study in fresco-like surface textures that is also anatomically correct, so you could almost re-invent the steam engine from its details.

By contrast, there’s “Summer Fantasy,” a joyous sunset landscape reverie as far as possible from the brutal boxing pictures that made artist G. W. Bellows famous. George Luks’ “The Breaker Boys” shows another form of brutality: children working in the coal mine, sorting the rocks from the coal.

And what is this? An entire room of 1960s modern icon Robert Rauschenberg’s work? How did this happen? Curator Jessica Todd Smith explains, "As we've begun to dip a toe into the Post-War period, we can tell so many more stories with the American collection in the galleries. We're the sort of young whippersnapper part of the Huntington collections."

Smith says that, back when Rauschenberg was in the Navy at the end of World War II, he made a visit to the Huntington that first exposed him to great art and he decided to become a painter. The room contains a wide variety of his work, but it is also a form of tribute to the deep and terrific experience and influence that the gallery has brought to millions of visitors over so many years.

The "lost" sounds of a long-gone amusement park - Off-Ramp for September 6, 2014