Spike Lee Retrospective: 'As an artist you want to have longevity'

The Academy of Motion Picture Arts and Sciences is in the midst of a Spike Lee retrospective, showcasing rare and recent films from one of America's most controversial and outspoken directors. Off-Ramp contributor R.H. Greene has this profile of Spike Lee, and four films that broke him through the studios' unofficial color line almost 30 years ago.

"We had Oscar Micheaux, Gordon Parks, Melvin Van Peebles," Lee said. " When you're talking about Jackie Robinson, that means the first. I was not the first." 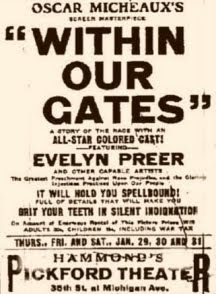 As a working filmmaker, Lee seems to think being placed on an edifice is the same as being put on the shelf. But younger black filmmakers? They carve Spike Lee onto their personal Rushmores, every time.

John Singleton is the writer/director of "Boyz n the Hood" and eight other feature films.

"You know, he's a hero to me," says Singleton. "He was the first African-American filmmaker to just say whatever the hell he wanted to say. From a black man's perspective, (to) make an honest discourse about whatever subject he wanted to make. "

Lee won't pick his favorite Spike Lee film, but that's a hard task for anybody if they're sympathetic to Lee's cinematic approach.

"When people come up to me and tell me what their favorite film is," Lee says, "there's a lot of films. People say 'She's Gotta Have It,'  ton of people say 'School Daze.'

My white fans, they loooovve '25th Hour.' People love 'Crooklyn' — a whole lot of people say 'Crooklyn.' So it varies. "

There have been failures too. Lee's remake of Park Chan-wook's cult classic "Oldboy" was among 2013's splashier critical and box office flops. Still, no major American filmmaker of Lee's generation has a more personal body of work, and none has broken more new ground.

Lee's a brand name, a pop icon, a human turning point in American social and cultural history. And though he's not ready to be treated like a monument, you get the feeling Lee was playing to history all along.

"It's not a good thing when you get put into this whole flavor of the month thing," Lee says. "It's not good to be a flash in the pan. As an artist you want to have longevity, because longevity will let you do your work. And artists want to build up a body of work."

Since 1986, Spike Lee has made nearly two dozen theatrical feature films, plus commercials, music videos, and documentaries too numerous to count.

The Academy series By Any Means Necessary: A Spike Lee Joints Retrospective continues through July with screenings both at LACMA's Bing Theatre and The Motion Picture Academy.