Southern California, now and then: Celebrating 30 years of a region

The year was 1985. On April 1, at Pasadena City College, a young broadcaster by the name of Larry Mantle sat behind a KPCC microphone and hosted a show called "AirTalk."

At the time, a gallon of gas cost about $1.10 and a postage stamp cost 22 cents. The compact disc, the Super Mario Brothers and New Coke were introduced to America. Microsoft released the first version of Windows and the first .com domain name was registered. All while Ronald Reagan served as President of the United States.

30 years later, that same broadcaster still sits behind a KPCC microphone and continues to bring his loyal listeners the latest in news, entertainment, and culture from Southern California.

Join us as Larry Mantle celebrate 30 years to the day of hosting the region’s longest continuously-running daily talk radio program (no April Fooling) with a special 2-hour live broadcast from our Crawford Family Forum. True to form, Larry and special guests will address the issues of the day as well as take a look at Southern California then and now with a conversation on what’s to come. There may even be a few surprises!

Scroll down for awesome content from today's celebration and from Larry's career.

Here are some notable interviews from yesteryear, including a Q&A on Scientology from 1988, which Larry says was one of the toughest he's done in 30 years:

Oh, and then there's the overwhelming amount of wonderful Twitter love we got from listeners, fans, show guests, KPCC colleagues, and even a couple of elected officials.

Bad fan on a busy day - Big congrats to @AirTalk & @LarryMantle for 30 yrs on @KPCC Always interesting, always honored to be a guest

Many congrats to Larry Mantle and @Airtalk for hitting 30 years on @KPCC! A real milestone and legacy of excellence!

Happy 30th year @AirTalk!!! Host Larry Mantle is a kind & hardworking guy worthy of so many accolades (and balloons). pic.twitter.com/SPs6KCwVWx

Happy 30th year @AirTalk!!! Host Larry Mantle is a kind & hardworking guy worthy of so many accolades (and balloons). pic.twitter.com/N6rnBWoU9O

Congrats to Larry Mantle: 30 years w @AirTalk under his belt. Here's to many more! @KPCC pic.twitter.com/5QSRo0vrZp

Celebrating 30 years of @AirTalk in the @KPCC newsroom with a Larry Mantle speech and cake pic.twitter.com/VgoX0bccBP

He deserves more than balloons + banner for 30 years of @AirTalk, but it's all I could pull off. Congrats Larry! pic.twitter.com/5wYHbRcRDQ

@LarryMantle Congratulations on 30 from a recent & big time fan of @AirTalk - such a great show! Always impressed by your interviews! @KPCC

Congratulations to @Airtalk on @kpcc celebrating 30 years of intelligent & thought-provoking conversations, from a longtime listener.

@sandentotten @AirTalk I agree a gentleman and a scholar and a jazz lover congrats Larry!

Happy 30th Anniversary to my favorite radio journalist, @LarryMantle of @AirTalk. You inspire us all with your thoughtful coverage!

So much fun & so honored to have @lacbc as part of @KPCC @AirTalk today. Happy 30th Anniversary! #AT30 #bikeLA pic.twitter.com/ANo21d3OVw

Happy 30th anniversary to @LarryMantle and @AIrTalk. Thanks for 3 decades of making SoCal's residents smarter and better informed!

A very big congratulations to Larry Mantle and 30 years of @AirTalk! Bravo!

Can't believe @LarryMantle was only 26 years old when he began the show now known as @AirTalk. What a career! #AT30 http://t.co/7wjiVaNZfD

I'm so excited to witness this! Happy 30th @AirTalk @KPCC #AT30 pic.twitter.com/wbKVpZNFaE 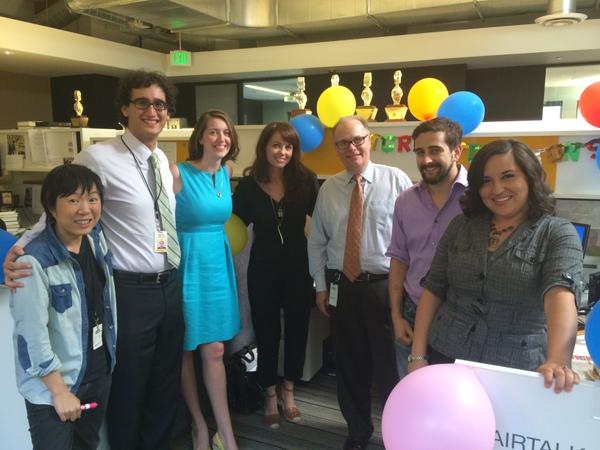