LAist shuts down along with its sister sites

The company behind LAist and its sister news sites in New York, San Francisco and elsewhere is shutting down all publications. This follows a decision by the staff at Gothamist and DNAinfo to unionize last week, the New York Times reports, though a DNAinfo spokesperson notes that the unionization is only one of the reasons that led to the sites shutting down.

As of Thursday afternoon, LAist.com, Gothamist.com and SFist.com all redirected to a note from DNAinfo CEO Joe Ricketts explaining the decision. 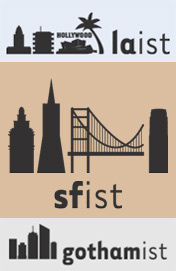 DNAinfo is “a business, and businesses need to be economically successful if they are to endure,” Ricketts wrote. “And while we made important progress toward building DNAinfo into a successful business, in the end, that progress hasn’t been sufficient to support the tremendous effort and expense needed to produce the type of journalism on which the company was founded.”

The decision leaves 115 journalists without a job, according to the New York Times. Writers and editors have used LAist and its sister sites as launchpads for their careers — KPCC itself has hired several former LAist contributors. The sites were curators and reporters of local news, and often functioned like online communities.

Kevin Roderick of L.A. Observed called the decision to yank LAist and its entire archive of content spanning 10 years or more "a big blow to people here in Los Angeles."

"As other media have cut back on local news reporting — but more so sort of local cultural chronicling and keeping up with trends and, you know, listening to what people are talking about on the street — I think those sorts of sites really, really were important in informing people about their city, and kind of filling that niche. And I know LAist filled that role for a lot of people in Los Angeles," Roderick told KPCC.

Ricketts bought the family of sites earlier this year, according to the Associated Press.

In his parting message, Ricketts wrote that he had “believed an opportunity existed to build a successful company that would report unbiased neighborhood news and information,” and that “because I believe people care deeply about the things that happen where they live and work, I thought we could build a large and loyal audience that advertisers would want to reach.”

The Times reports that staff will get three months pay and four weeks of severance.

In a message aimed at writers concerned about preserving copies of their work, Julia Wick, LAist’s editor-in-chief, tweeted that a backup of the site may have been made.

"LAist was a professional staff," Roderick said. "These weren't just bloggers who were, you know, writing whatever they wanted. These people were paid, and they had an editor, and they were doing journalism."