Much attention has been paid to the Santa Monica Mountains lately because of a population of mountain lions that appear to be slowly losing a battle with inbreeding and nearby highways. But there's another threatened species in the area that deserves some attention: the red-legged frog.

For the first time in years, there are signs of natural reproduction among California red-legged frogs in the coastal mountain range, with the discovery earlier this month of nine egg masses, according to wildlife officials.

The jumping amphibians, immortalized in Mark Twain's 1865 short story "The Celebrated Jumping Frog of Calaveras County," are listed under the Endangered Species Act and have not been seen in the region since the 1970s, according to a statement from the National Park Service. A population of red-legged frogs from the Simi Hills was translocated and used to revitalize the local biological count over the past four years as part of a reintroduction project.

Video from the National Park Service offers a peek into that process: 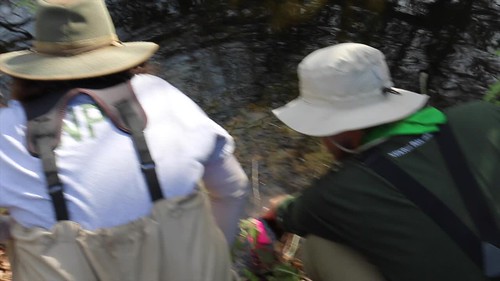 This indication of self-repopulation among the species seems to indicate those efforts are finally starting to bear fruit. Wildlife officials hope this behavior will continue.

California red-legged frogs require deep pools of water, which are few and far between in these mountains. A statement from the park service said that existing streams of water are often infested with non-native species that prey on frog eggs and tadpoles.

The frogs' importance to the surrounding ecosystem is marked through their permeable skin, which effortlessly absorbs environmental contaminants and can provide vital information to researchers about habitat health in the surrounding area.

Until the population is solidly reintroduced into the Santa Monica Mountains, visitors are being encouraged to be cautious and aware of aquatic habitats.