Patt Morrison – sometimes she kicks butt and takes names, and sometimes she just has a good time talking with her smart and engaging guests, from authors to actors to scientists and politicians and, once in a while, some first-class eccentrics. After all, it’s LA.

Confessions of a fair-weather Dodgers fan

There are 162 games in the regular season of a major league baseball team, and I have watched exactly … hm … none. Spring, summer, autumn, as the Dodgers died and rose from the dead, I wasn’t looking.

But now, like almost everyone else in L.A., I will be cheering them in the playoffs, cheering them to their first World Series game since Michael Dukakis ran for president.

I am that deplorable creature: The fair-weather fan.

I like sports just fine, but my sport is football.

They say baseball is a relaxing game. Boy, is it!  You can eat, doze, eat again, and it’s still the fourth inning. I’ve tried to love baseball, I really have. But the diamond can’t beat the gridiron when it comes to football’s built-in thrill advantage: At any possible second, the football can change hands, the defense becomes the offense … and score!

Someone just told me that pink and gray were Vassar’s colors. I would say, “Go Vassarettes!” but, one, Vassarette is a line of brassieres, and, two, the Vassar mascot is The Brewer, for the profession of its founder, Matthew Vassar. You go, Seven Sisters girls and guys!

The scarf is one of two I picked up on vacation – for some reason insect themes are big just now. This one has little gray ants marching over a pink field, a reminder of – what? Teamwork? Conformity? Time to call the exterminator? The other scarf, which I’ll wear presently, is the color of a ripe nectarine, with a pattern of vividly colored beetles. Scarabus chic. Dashing, no?

The glittery pink shirt is one more example of that contrast that I like, against the matte gray knit of the sweater (indoor-outdoor wear for L.A. summers, going from AC to Fahrenheit in a flash). Which explains the vast and shady hat – like a veranda on my head!

What shall we call this color scheme? How about ‘Manhattan Mermaid’?

The petrel blues, the turquoises, the aquas – and then that uptown/downtown black, in this case a black linen duster over a Peter Max-style splashy-print silk dress. The way the hem pools at the sides a bit reminds me of the cut of Pre-Raphaelite ladies’ tunics; I’d love to dress “period” for a week to see whether I’d like it.

The hat is so unmistakably summer in fabric and color that it doesn’t get out of the hatbox as much as it should, poor thing. And the shoes – I did not get them together, honest, but even though the prints don’t match, it’s the dissonance that makes them work better together than if they had.

Trust me – you’re going to be seeing a lot of these between now and Halloween.

I went to “The Lone Ranger” premiere last month, and outside the theater, Disneyland began selling a version of the Tonto headdress dreamed up by Johnny Depp and his folks for his role in the film, which I found to be a rollicking, ironic version of the classic action adventure with some very sober scenes evoking Native Americans’ tragic history.

The inspiration, Depp says, was artist Kirby Sattler’s interpretive 2006 painting “I Am Crow.” 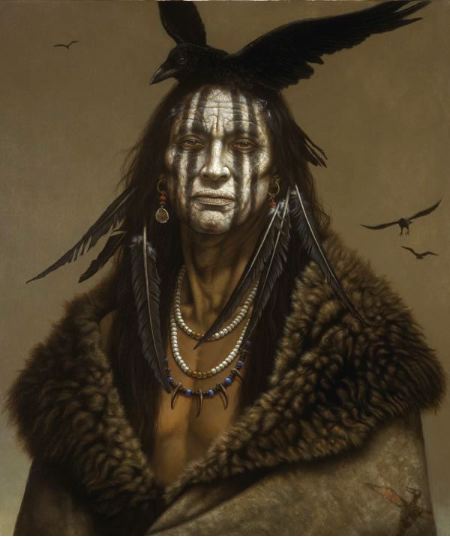 Depp himself has claimed Native American ancestry, and the bird atop his bean plays a substantial if silent role in the proceedings. It is an interpretive painting, as I said, not a literal rendering of any tribal makeup. In the Sattler painting, the bird is flying above the figure’s head, not perched on it.

There are so many things  I like about this dress – the sleeve length, the boat neck, the fact that it’s navy and not black, and the fact that it wasn’t made in Bangladesh – but mostly it’s the gaily asymmetrical floral design that caught my eye.

The pattern is front and back, and I’m a stickler about those things. It looks like I have been loaded down with festive leis, but also loaded with one too many Mai Tais, so the flower garlands are askew as if I were listing a little bit.

There’s more of my current yellow shoe madness with these very Michelle Obama kitten-heel slingbacks in two different tones of yellow, one a more acid shade and the other more canary, or perhaps chrome yellow. That’s not to be confused with “Crome Yellow,” a very sardonic Aldous Huxley novel parodying the artsy intelligentsia set of 1920s England.