The Getty's new $65M Manet: 'Spring' from an artist in the autumn of his life

A  132-year-old vision of springtime has landed permanently at the Getty Museum, smack in the middle of this California autumn: "Spring (Jeanne Demarsy)," one of Impressionist painter Edouard Manet’s  last completed pictures.

Here's what Getty Director Timothy Potts had to say about the artist:

Manet was the ultimate painter’s painter: totally committed to his craft, solidly grounded in the history of painting and yet determined to carve out a new path for himself and for modern art. ... Alone of his contemporaries (the only one who comes near is Degas), Manet achieved this almost impossible balancing act, absorbing and channeling the achievements of the past into a radically new vision of what painting could be.

"Spring" somehow manages to be the evocation of youth itself and all its hopes. The subject is 16-year-old actress Jeanne Demarsy, just then seeing her stage career ascend at the same time Manet neared the end of his own career. (He died at age 51 in 1883,  soon after the painting went on display.)

For most of the years since its creation, the picture has been in private hands. It was recently on loan to the National Gallery.

Getty Assistant Curator Scott Allan said that the Getty worked hard to acquire "Spring" and was lucky to get her. According to news reports, the Christie's auction price paid was an eyebrow-lifting $65 million — about double the top previous sale price for a Manet. "We don’t discuss the price," Potts said.

At the Getty, "Spring (Jeanne Demarsy)" hangs next to an early Manet in the museum's Impressionist-Post Impressionist gallery. It was intended to be one of the "Four Seasons" by the late-19th century French master. The series was never completed (although "Autumn" hangs in a museum in France). Allan said that, unlike many of Manet's early works, "Spring" was intended to hang in the Salon, the French art establishment’s showplace of traditional painting, which had rejected innovators like the Impressionists for decades. That led most of the Impressionists to disdain the Salon. But Allan said Manet was extremely pleased that his late work was accepted there.

So popular was it that "Spring" became the subject of one of the first color photographs of a work of art. Its acquisition by the Getty brings to Los Angeles the most important — and beautiful! — painting by this artist left in private hands and one of the great masterpieces of late-19th-century art.

The painting depicts a lovely teenager, dressed in the peak of 1880s fashion in a blue-on-white printed dress; a flowered, fringed hat; and a parasol balanced on her left shoulder. The background features white rhododendrons, barely in blossom.

Mlle. Demarsy stares off to the left, the demure image of a confident young woman at the earliest spring of her adulthood, with an entire creative life before her, already immortalized before the world by one of the century’s greatest artists.

But Manet was himself at the peak of his accomplishments,  just before his sudden demise.

"Spring" became one of Manet’s most popular works, deeply appreciated by art lovers young and old and by critics of both the old guard and the avant garde. It was his last picture to hang in the Salon. Manet’s powers would soon decline, and he devoted much of his last few months to watercolors, said Allan. 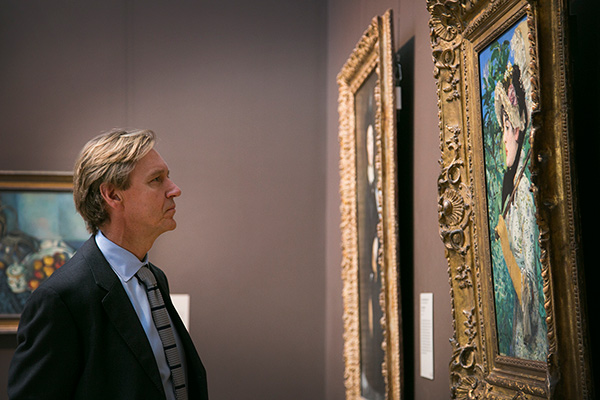