“No matter how slow the film, Spirit always stands still long enough for the photographer It has chosen.’’ —Minor White

Now the Getty Center has mounted the first White retrospective in 25 years at its Brentwood campus. It opens up White’s work in two directions: into his early Oregon past, when he was still a student of his art, and into the homoerotic realm that he tried to keep hidden all his life.

A native Minnesotan,  White’s first artistic medium was poetry. In the 1930s, he wrote 100 sonnets, about which it would be interesting to know.

In 1938, he moved to Portland, Ore., where he taught himself photography out of  books from the library. He must have been a terrific learner, because by the end of 1938,  he was producing magnificent  pictures for the federal General Services Administration.

His biggest subject was Portland’s Front Avenue, a downtown district packed with 19th century ornate cast-iron fronted buildings in various classical styles. The GSA wanted a record of these buildings because they were threatened with demolition and were in fact taken down in 1942.

White’s gelatin prints transform the old buildings into a Fellini-ish night-time world of majestic structure and shadow, inhabited only by an occasional street hustler waiting for a john. 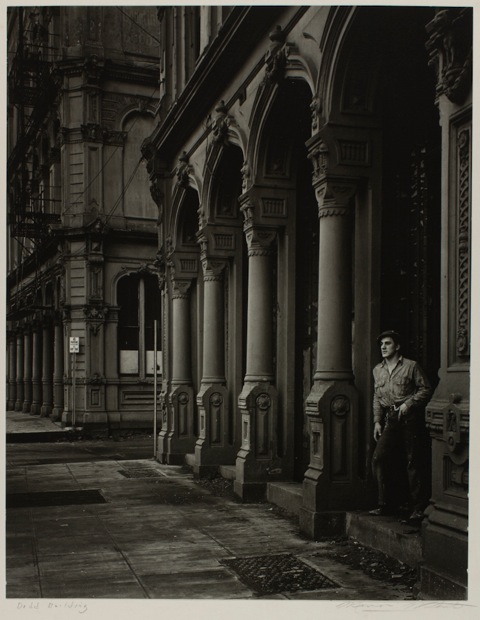 His was obviously a major talent. Soon he was exhibiting some very different work at the Portland Museum of Art. Many of these photographs were nature still lifes from the landscape around Portland. You can find in their symbolism the true roots of White’s great, Zen-inspired later work.

White’s advancing career was interrupted in 1942 by three years of military service. In 1945, he began study at Columbia University and learned from such famous figures as Meyer Shapiro and Alfred Stieglitz.

But he soon returned to the West to teach photography at California School of Fine Arts in San Francisco. In 1952, he co-founded the photographic magazine “Aperture.”

Along the way he did impressive nudes of the men he loved — work mostly kept secret during his life, but now shown at the Getty.

His other work was becoming increasingly symbolic as he himself became more influential. In 1953 he relocated to Rochester, N.Y. There he accepted a post as curator of the George Eastman House and began a deep study of Eastern  mysticism.

This resulted is a sequence of abstract photographs that White named “Sound of One Hand,” after the famous  Zen Koan. This is perhaps the summit of the show.

Curator Paul Martineau explained: “White called on the viewer to be an active participant in experiencing the varied moods and associations from moving from one photograph to the next.”

But then, that’s also the way one sees the totality of the work on display in this remarkable exhibition.