I spent some time last weekend traipsing around the old Santa's Village theme park up in the San Bernardino Mountains.

Here's how the Los Angeles Times described it at its peak and what happened to it:

In its heyday, Santa's Village was one of Southern California's biggest tourist attractions — a place to catch the holiday spirit even in July. It opened on Memorial Day weekend 1955, more than a month before Disneyland. But after 43 years of delighting young and old in the San Bernardino Mountains, the 15-acre elfin theme park — with fanciful, life-size gingerbread and doll houses, a candy kitchen and a toy shop — fell on hard times and closed in 1998. Over the last nine years, the log cabins of Santa's Village have deteriorated, becoming a veritable ghost town. Its parking lot was used for a jazz festival and by locals for sledding and snow play until it became a way station for bark-beetle-infested trees on their way to a sawmill. But Santa's Village isn't forgotten. (Cecilia Rasmussen, L.A. Times, Dec. 24, 2006)

I have this amazing memory of it. My family went there only once. It's the only childhood memory of Santa I have that stuck. Santa told me to stop throwing my damp towels behind the hamper. Something I always did that bugged my Mom. How did he know that? I've always assumed because Santa knows these things.

To this day, my Mom says she didn't tell him.

Mrs. Claus was equally amazing. She kept laughing and hugging me and giving me candy. And she looked exactly like Mrs. Claus should look.

I mentioned this trip to my sister the other night. The first thing she said was, "Mrs. Claus loooved you, she took you away, and we didn't know where you were." She probably took me to her spice shop.

We never went again. So it became a little mythologized in my mind. Where was that place? 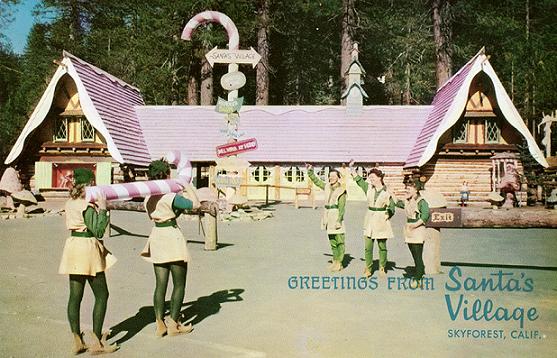 I moved to the mountains about eight years ago. I came out of my neighborhood, turned left, and there it was! But now it's Santa's ghost town. I never saw it in decline. It went from being that warm childhood memory to this. I walked through it. So weird to see it empty, quiet.

You really get a sense of place when you sit and draw it. You absorb it. The weird thing is that it looks like they just up and left. There are still curtains in the Gingerbread House. No color on it anymore except the pink frosting roof.

The Bumble Bee Monorail Station still has a bee bucket sitting waiting for a rider. The buckets are still on the track. Like everyone got Christmas raptured, and — poof — were gone.

Whenever I mention this place to people, they always say they wish they would open it again. But I think time passed it by. It was just about running around in the woods and hanging out with Santa and his reindeer. Probably a little slow for today’s kids. But I get a weird comfort in it being there.

And I still think that Santa was the real deal.