Our story begins last year at this time, when it occurred to me that Halloween would be the perfect time to bring back “The War of the Worlds,” the most famous radio broadcast of all time.

Curious as to whether it was even legal to broadcast it on Off-Ramp, I Googled the Orson Welles/Mercury Theatre production, expecting to find that it was in the public domain. And I found that while CBS doesn’t protect the transcription of the 1938 broadcast – the sound, as it were – someone does hold the copyright to the script used for the broadcast.

It turns out that “Casablanca” screenwriter Howard E. Koch, who was later shamefully blacklisted as a Communist, won a copyright battle from Orson Welles after Koch proved in court that he had adapted the H.G. Wells SF novel for the Mercury Theatre production. Koch died in 1995, but his widow and son were (and are) still alive, and they license the broadcast.

So last year, we bought the rights to a few airings of “The War of the Worlds” and put it on the radio again. In a genial email exchange afterwards, the Koch family’s lawyer, Norman Rudman, mentioned that the next year, 2013, would be the broadcast’s 75th anniversary and there might be a lot of interest ... and not just in L.A. or the U.S., but also worldwide. Well, Norm had me at “worldwide,” and we worked out a deal for the rights.

Some 543 (I know, it’s a weird number, right?) KPCC travel mugs and one KPCC tote bag later, and we got the international rights, except for Australia. I think Norm went easy on us because we are distributing the show free of charge to any station – commercial or public. The next question was, who should introduce the show for the worldwide audience? We needed someone with fame, sex appeal (sex sells, baby, even in public radio), gravitas and an instantly recognizable voice.

Now, you and I know Off-Ramp is a great show, but they don’t know John Rabe in Dusseldorf, Dakar, Istanbul, Beijing, South Georgia Island or Joliet.

One email later, and we’d nailed it down. George Takei  would donate his talents. George has the voice and the sex appeal, but also a gravitas borne of his work for gay rights and the issue of the U.S. government’s internment of 100,000+ Japanese-Americans during World War 2.

But enough about George. It is very gratifying to know George will be saying “Southern California Public Radio” and “John Rabe” to millions of people over the BBC, CBC and Minnesota Public Radio, KHSU at Humboldt State University, WBEZ-Chicago and WNYC-New York, and WFLO in Farmville, Va., among other outlets.

We’re not just sending out “The War of the Worlds,” but we also brought on Off-Ramp contributor R.H. Greene to produce a companion documentary, and many of these outlets will also be broadcasting his “War of the Welles,”  which gives the broadcast’s backstory and shows why it was so effective on that night 75 years ago. Both are being distributed by PRX, the Public Radio Exchange.

The documentary aired this weekend on Off-Ramp, and the 1938 rebroadcast airs Wednesday at 8 p.m. We’re also throwing a “War of the Worlds” listening party at the Crawford Family Forum that night; I hope you can join us.

Oh, by the way, if mass hysteria erupts worldwide this Wednesday, you don’t know me. 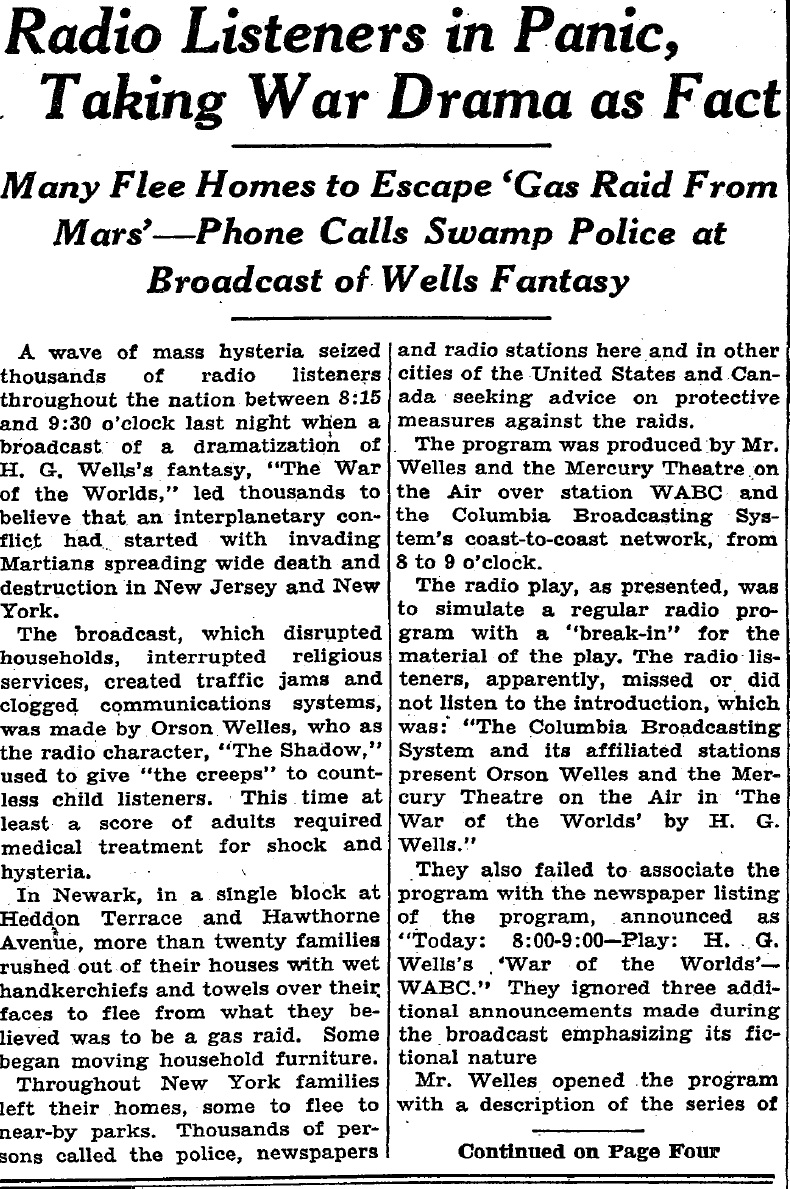