March 19 marks 10 years since the U.S. invasion of Iraq. In the decade-long runup to that anniversary, media organizations and others have taken the river of data describing the war and its many costs and turned them into infographics, data visualizations and other graphical presentations, which we have collected for you here.

A sampling of news coverage in the past couple of days suggests even more Iraq War data is on the way:

The war has killed at least 134,000 Iraqi civilians and may have contributed to the deaths of as many as four times that number. Factoring in security forces, insurgents, journalists and aid workers, the death toll rises to an estimated 176,000 to 189,000.

As taxpayers, we're all on the hook for that estimated $6 trillion tab. That's nearly half the current national debt. We spent about $550 billion on Medicare last year. Six trillion bucks would fund our healthcare coverage for seniors and disabled people for roughly a decade.

Click for larger versions of the graphics or to be taken to the original source.

1) The Guardian: Iraq after the invasion, A decade visualised 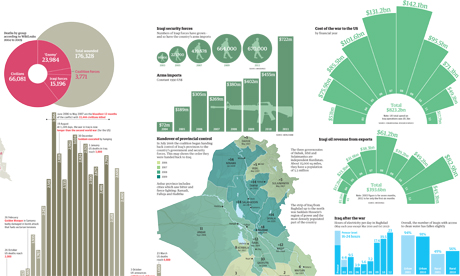 "It's ten years since Iraq was invaded. What kind of country has been left behind — how many people died and what was the effect on the US and UK military?"

"[P]eering into the Iraq War Logs by visualizing them in bulk, as opposed to using keyword searches. ... We wanted to go a step further, by designing a visualization based on the richest part of each report: the free text summary, where a real human describes what happened, in jargon-inflected English. ... The exploratory work described in this post has since blossomed into the Overview Project, an open-source large document set visualization tool for investigative journalists and other curious people."

"6,630 U.S. service members have died in Operation Iraqi Freedom and Operation Enduring Freedom. Faces of the Fallen is a collection of information about each U.S. service member who has died as a result of the wars in Iraq and Afghanistan. ... This information is updated at least weekly from military releases, news service reports and local newspaper stories. The photographs come from news services, local newspapers and family members."

6) NPR: "The War Card: Orchestrated Deception on the Path to War"

Database by phrase, person and subject. "President Bush and top administration officials made more than 900 false statements in the two years following Sept. 11, 2001, about the national security threat posed by Iraq under Saddam Hussein, according to ... a report by [Center for Public Integrity] public interest group." 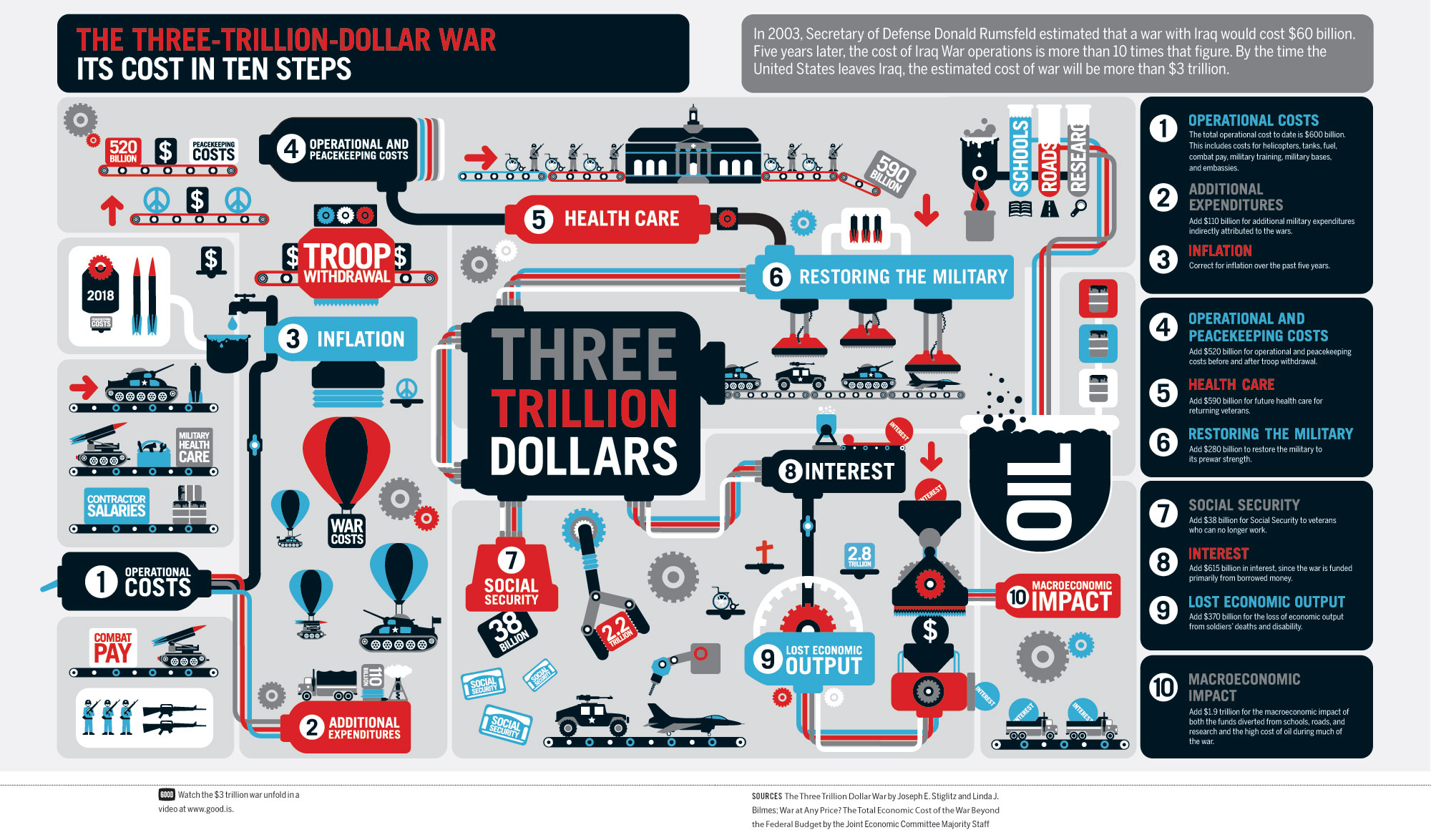 "In 2003, Secretary of Defense Donald Rumsfeld estimated that a war with Iraq would cost $60 billion. Five years later, the cost of Iraq War operations is more than 10 times that figure. By the time the United States leaves Iraq, the estimated total cost of war will be more than $3 trillion" "In this timeline, we've assembled the history of the Iraq War to create a resource we hope will help resolve open questions of the Bush era. What did our leaders know and when did they know it? And, perhaps just as important, what red flags did we miss, and how could we have missed them?"

Have you seen an interesting visual analysis of Iraq War data? What do you want to see visualized?