A rare "superpod" of dolphins formed this week off the coast of Southern California not far from the shipping lanes — a treacherous aquatic crossroads where ocean life collides with port traffic.

Forming a true animal collective, an estimated 5,000 or more protected sea creatures showed up to protest the deadly "ship strike" zone, or possibly just to feed on the squid invasion.

KPCC spotted the frolicking cetacean convergence around 10:00 a.m. on Wednesday in the waters off Long Beach past Rainbow Harbor.

Pods of Pacific white-sided dolphins were seen consorting with crews of common dolphins to create a widespread, fast-moving circus of jumps, spins, dives, and other acrobatic water feats.

We encountered the dolphin party while out searching for an 80-foot whale (on a 65-foot boat) as part of a Harbor Breeze excursion to learn about the elusive, endangered creatures recently seen in the area.

The shockingly large concentration of dolphins was an unusual sight, according to experts on our fully surrounded vessel.

Other creatures tolerated our presence as we continued to cruise for fin whales. From their floating positions, sea lions lounged and waved us through the mercifully wave-free water. A sleeping elephant seal even directed the boat quietly by way of its bobbing head. 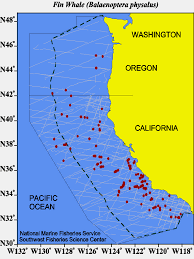 Captain Jennifer Williams with the U.S. Coast Guard accompanied our early-morning educational ocean voyage, along with marine mammal biologists from the Aquarium of the Pacific and NOAA. We did not share our conspiracy theories with them. Instead, we asked about endangerment and how it's assessed.

Marine biologist Monica DeAngelis with NOAA explained that it's not a population threshold that qualifies an animal for endangered status. To make that determination, experts take a global look at the numbers and examine reproductive rates, sex ratios, prey, climate, and other environmental hazards.

Fin whales, DeAngelis said, are still endangered, however "our stock" — comprised of California, Washington and Oregon fin whales — has been increasing annually. Blue whales, she said, have not seen the same improvement.

Ship strikes and entanglement are the biggest threats to the second largest animal on the planet, says DeAngelis (the same dangers exist for blue whales, gray whales and others).

Our finally found fin whale created a smooth, slick-looking water patch just before surfacing for us near the Whiskey Buoy — directly in path of one of the shipping lanes.

The endangered creature can swim up to 19 miles per hour and is sometimes referred to as "the greyhound of the sea," according marine mammal biologist Kera Mathes with AOP. They rarely show their tails when making a deep dive, and once they go under, the massive creatures can hold their breath for up to 20 minutes.

The International Maritime Organization recently approved plans to re-route traffic off the California coast in an effort help to protect endangered and migrating blue, fin and humpback whales from deadly ship strikes.

Lane modifications, crafted by NOAA with support from the Coast Guard and the shipping industry, changed the approach to the ports of Los Angeles and Long Beach, and in the Santa Barbara Channel. DeAngelis told KPCC the lane changes were a tangible way they could help "reduce co-occurrence" in "high density" areas.

Aquarium visitors with a Gray Whale Watch combo ticket can take their own conservation-minded ocean excursion. View the exhibits and then hop a Harbor Breeze double-decker that's docked next door.

The nonprofit Aquarium of the Pacific is dedicated to environmental education. Its vision is to create a sustainable future for nature and its resources by building relationships between and among people. The Aquarium is home to over 11,000 animals in more than 50 exhibits. Facebook | Twitter | YouTube | Instagram